Book Review: Birth of the Fae: Locked Out of Heaven by Danielle Orsino 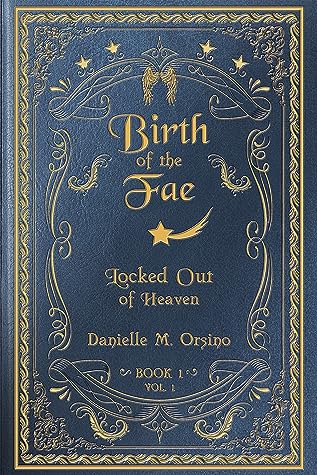 What would you do if all you knew had abandoned you? Abandoned by their creator, two factions of angels remain on earth after the Great War with Lucifer. These Virtues and Power Angels struggle to comprehend their Creator’s plan while their wings, a symbol of their angelic lineage, slowly and painfully decay. Unaware of one another, the angels learn to survive and reinvent themselves. With no hope of returning to the Shining Kingdom, both groups denounce their angelic lineage and develop into their own factions. They call themselves the “Fae.” This is their story. The Fae world is ruled by two distinct courts: the Court of Light, led by Queen Aurora, a former Virtue Angel, and the Court of Dark, ruled by King Jarvok, a former Power Brigade Angel. The two monarchs have opposing views on how to govern their kin and, more importantly, the way humanity plays into their survival. The one belief they agree on is human worship equals power. Exactly how the two go about capturing and maintaining power is a very different story. Ride on the backs of dragons with the Dark Fae and watch the Light Fae play in the shadows of primitive humanity as they build their kingdoms. A fantastic epic adventure of heartbreak, rebirth, and hope that examines the bonds of family, friendship, and love. What would you do if you were abandoned? If you were forced to reinvent yourself? If your core beliefs were challenged? Would you ignore your own pain, instead channeling it and acting benevolently? Or would you become ferociously protective of those by your side, consolidating power to ensure nothing would ever hurt your kin, even if it meant acting malevolently? Two Fae must face these choices when they are thrust into the roles of monarchs, each one choosing a path that will guide them toward an unknown future. No longer angels, no longer bound by their Creator. They are their own beings and masters of their own destiny. They are the Fae.

My Take on the Book

Author  Danielle Orsino  on her first series of Birth of Fae- Locked out of Heaven narrates a gripping tale of a dark yet a fantasy world of virtue and power. The book is so well written that it takes you on a imaginary world of fantasy and magic. TBH, it took me a while to come out of the world of angels after I finished reading the book. Everyone knows that a lot is expected from a debut author, and I feel Danielle as a debut writer passed the test. The plot line is intriguing and each of the character introduced to us is alluring and enticing. The cover of the book is totally not to be left without praising. It is beautiful.

A mix of mystery and magic, the 'Birth of Fae' narrates the tale of angels been cast out of heaven. On failing to comprehend their creator's plan while their wings (symbol of their angelic lineage), these virtue and power angels slowly and painful decay. they are unaware of one another, thus they are made to learn on how to survive and reinvent themselves. With no success to return to their shining kingdom, both groups denounce their angelic lineage and develop into their factions. Since a lot have been mentioned on the blurb on what the book is all about, I won't be going into more details.

As the first installment of the book series, I am impressed by the author's use of words and her narration skill is spot-on. Initially I though the book was dragging the story, but a few pages later, I couldn't put it down. Nonetheless, this book is the perfect blend of mystery, magic, adventurous, and angelic. In case you wish to know or if are curious to find out who the 'Fae' are, then you must definitely give this book a read. You won't regret it.

Title: Birth of the Fae: Locked Out of Heaven