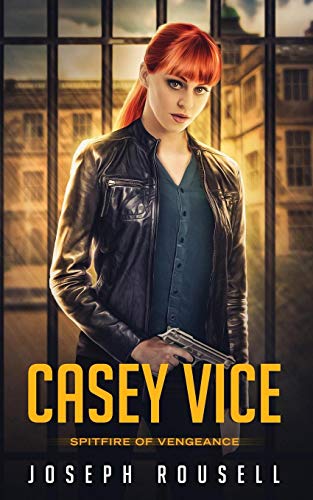 About the Book
When Casey Vice was 8 years old, her father, a police captain who founded Saturn City’s Criminal Intelligence & Organized Crime Unit, and her mother were murdered in front of their home. Orphaned and left with unanswered questions, Casey and her siblings narrowly escaped death, but not scars the horrific ordeal escaped death, but not scars the horrific ordeal seared into their innocent minds…
15 years later, Casey, now a detective in the CI/OC, receives an invitation too dangerous to accept, yet too good to simply dismiss: a personal invitation to meet Shawn Anderson, the head of Saturn City’s mafia himself… at his private estate.
She warily accepts the invitation and is faced with the gruesome revelation about her tragic past and an ultimatum that puts a million-dollar bounty on her head. As every con and killer in Saturn City’s seedy underbelly looks to collect, Casey is propelled on a collision course with Saturn City’s criminal regime-undaunted and determined to show everyone in her path why she is “ The Spitfire of Vengeance.”

My Take on the Book
Casey Vice: Spitfire of Vengeance by Joseph Rousell is a crime-thriller book about a teenage girl named Casey who will be discovering a tragic revelation of her past when she is invited to meet Shawn Anderson, the head of Saturn City’s mafias.
Casey had a horrific childhood memories, both her parent were murdered and she was left with a few unanswered questions which led her to becoming a detective, 15 years later. The horrific death of her parents made Casey strong enough to tackle any kind of hurdles that was coming her way. She trained herself to find her parents killer and give them the much-deserved punishment.
The book is an action-packed read with a twist of crime, thriller and mystery. The author described Casey as a very fierce and a brave character who is willing to go to any extreme to avenge the death of her parents and find justice for the same. The story is a fast-paced, action-packed and is a very short read, the flow of the plot line is gripping and you won’t even realize you made it to the end of the book. However, the short read made me feel like the story was incomplete. On the contrary, it is just like a good action movie, leaving you wanting for more thrill and spills. I am not someone who enjoys an action-packed story, but this one kept me hooked till the end.
I would surely recommend if you are looking for a good thriller and mystery read with a fierce woman as a protagonist.