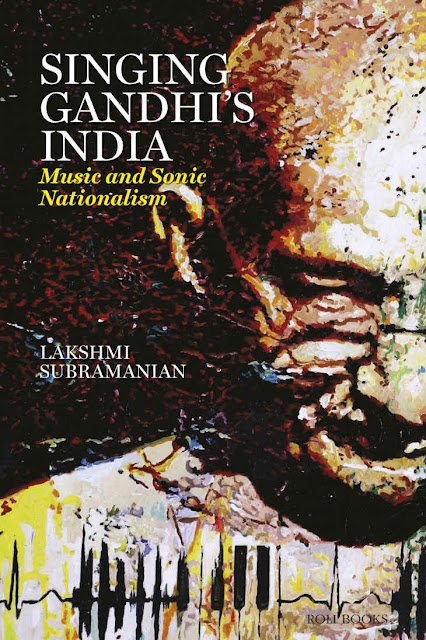 About the Book
Here are the first-ever and only detailed account of Gandhi and music in India. How politics and music interspersed with each other has been paid scanty, if not any, attention, let alone Gandhi’s role in it. Looking at prayer as politics, singing Gandhi’s India traces Gandhi’s relationship with music and nationalism. Uncovering his writings on music, ashram Bhajan practice, the Vande Mataram debate, Subramanian makes a case for closer scrutiny of Gandhian oeuvre to map sonic politics in twentieth-century India.
My take on the book
When I first received a copy of 'Singing Gandhi’ s India by Lakshmi Subramanian, I had a different notion about the book. I thought it was about Gandhi and his love for music but the book is completely different from what I expected, and is more insightful.
I would say it is a very enlightening book on Gandhi and Music, it’s more about his expositions on music as an artistic activity or more on a very specific resource in building a sonic community. The book takes you on Gandhiji’s idea of music and his impression of it. Just like what the blurb said, this book is the first-ever and only detailed account of Gandhi and music in India. The book will take the reader on a wider idea of music and musician. From the Christian hymn to the bhajan to the azan, everything has been surveyed. The content of the book consists of decoding the Nation’s soundscape. Crafting a community, amplifying politics and spinning the wheel in silence.
The book is highly insightful, and anyone who is into music or love to explore music based on Gandhi's P.O.V will love this book. Thorough research on Gandhi’s life, the author brought this book to life.
It looks at Gandhi’s writing on music and musician, the place of music in his ashram prayer service and in his national education scheme. The book is a clear survey of respond to music. According to what the author has mentioned in the book, unlike Tagore, Gandhi’s pursuit of music was not driven by purely aesthetic and artistic considerations. His overriding concern was to create conditions for the constitution of the perfect moral subject, the Satyagraha, and thereby facilitate his/her pursuit of swaraj or self-rule. And with this note, I agree with what the author was trying to convey through his writing. Maybe you would understand and agree with it once you read the book.
You can grab a copy today to read the fascinating and enlightening survey in this beautiful book- Singing Gandhi’s India by Lakshmi Subramanian.
Book Details
Title: Singing Gandhi’s India
Author: Lakshmi Subramanian
Hardcover: 240 pages
Price: Rs. 454
Publisher: Roli Books; First edition (9 January 2020)
Language: English
ISBN-10: 8194295963
ISBN-13: 978-8194295969
My Rating: 4/5