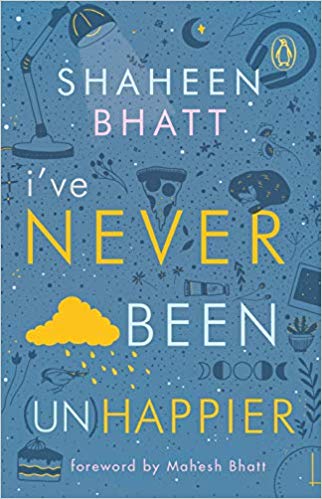 About the book
Lights, Camera . . . Inaction Unwittingly known as Alia Bhatt’s older sister, screenwriter and fame-child Shaheen Bhatt has been a powerhouse of quiet restraint—until now. In a sweeping act of courage, she now invites you into her head. Shaheen was diagnosed with depression at eighteen, after five years of already living with it. In this emotionally arresting memoir, she reveals the daily experiences and debilitating big picture of one of the most critically misinterpreted mental illnesses in the twenty-first century. Equal parts conundrum and enlightenment, Shaheen takes us through the personal pendulum of understanding and living with depression in her privileged circumstances. With honesty and a profound self-awareness, Shaheen lays claim to her sadness, finding it a home in the universal fabric of the human condition. In this multi-dimensional, philosophical tell-all, Shaheen acknowledges, accepts and overcomes the peculiarities of this way of being alive. A topic of massive interest to anyone living with mental health disorders, I’ve Never Been (un)Happier stretches out its hand to gently provide solace and solidarity.

My take on the book
How many of us talk about mental health? I bet, almost every one of us does. But do we know how it feels? Do we know what it is like to live with it? How can we stop something that’s beyond our control?
Surely, only those going through the trauma knows the pain.
As I said, mental health is something which is talked about a lot but we hardly can do anything about it, sometimes we don’t even know if the person with one has it. Because it is hard to understand and even hard to make it out.
When I first heard the book written by Shaheen Bhatt I thought it would be a self-help book that directs us to taking care of our mental health and so on. But on reading the book, I realized it was about the real encounter of the author going through a phase of depression and anxiety. To be honest, I felt the book was raw and straight from the author's heart.
I could understand the pain she must have gone through. We often think the life of a celebrity is all full of fun, parties, good food and outfits. Yes, that is obvious but we never know what’s behind the face of all charm and poses. And, here I understood from her perspective, coming from the family she was from, a successful father who is a renowned filmmaker, a beautiful mother who was once in a successful cinematic actor, a super talented sister with beaming awards in her name and so on. Somewhere she felt that she didn't fit into the family. To put all these in words, it must have been even harder than going through the phase. I found the book rather honest and brave. As she lived with depression, Shaheen Bhatt has beautifully written her journey with depression and narrated her pain as real which does not come because of her lifestyle and is not taken away by her lifestyle. Revealing her daily experience, she shared the bigger picture of one of the most debilitating and critically misinterpreted mental illnesses in the 21st century. The book openly talks about her thought on suicide and where there were days she didn't even want to get out of her bed.
For people like me, I won’t understand what it must have been to be trapped with something beyond our control, but I understood the pain of trying to break something which is not anyone’s choice. Do pick a copy to understand depression, it’s a struggle and to know more about mental illness through the eye of Shaheen Bhatt from her debut book, I've Never Been (Un)Happier

July 31, 2018
Tried and Tested! For the past two months, I went through a very bad acne outburst phase. And when I say bad, it means BAD. So, with my knack for researching, I googled trying to find a cure or maybe at least some home remedies to treat my acne. But, a multiple trial and error and I gave up.  We know how pimple popping is more than just satisfying, hence the 'habit' left me with very bad scares on my forehead and chin, also I noticed more acne than I had in the first place.  Finally, a visit to my dermatologists came to my rescue. She prescribed  some medication i.e. face wash (I am coming to this), some anti-acne ointments, and a few capsules to take.  Obviously, I had to religiously follow the skin routine treatment, but in the hour of everything, there was this thing which I discovered… it was the face wash (Yep, the point of this blog, TBH) which I can give the entire credit to. AKA presenting to you my fountain of youth in a face wash (I am exaggerating a lil bit.
10 comments
Read more

September 18, 2017
“He knows everything about her, right from her favorite books to her favorite bra. She knows everything about him, right from his favorite soccer club to his favorite x rated websites. He will complete her English homework, even at three in the night. She will arrange an Armani suit for him, even if it calls for flirting with ugly guys. He has her picture in his wallet. She has his number on speed dial. They talk to each other all the time. They talk about each other when they don't talk to each other. They discuss everything from periods to PlayStation. They have tasted alcohol and then thrown up...together. They have bunked countless tuitions... together. They can’t live without each other. YET they don't love each other. They are JUST FRIENDS... ” Can they be just friends? I mean a Boy and a Girl? This is a universal quest everyone is  trying to find seek. Some say they can, while the rest says it's not possible. I am ask
3 comments
Read more