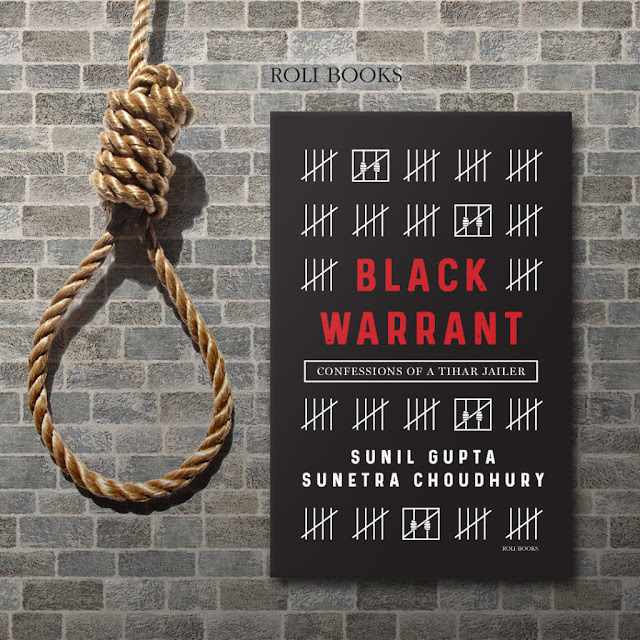 About the book
What is life like inside Asia’s largest prison? What happens when a man is hanged, but his pulse refuses to give up even after two hours? Did Nirbhaya’s rapist, Ram Singh, commit suicide or was he murdered? For the first time, we have a riveting account from an insider who has spent close to four decades as an officer at Tihar Jail during some of the most turbulent times in Indian political history. For the first time, he breaks his silence about all he’s seen – from the first man he met in Tihar, Charles Sobhraj, to the controversies surrounding former CBI head, Alok Verma. Responsible for carrying out ‘Black Warrants’, Gupta witnessed 14 hangings, the most recent and his last, being that of Afzal Guru. Joining him is award-winning journalist Sunetra Choudhury whose recent book Behind Bars is a bestseller and took her deep inside the maze of prisons. Read this book for the most intimate and raw account of India’s judicial and criminal justice system.

My take on the book
TBH, I was kinda sceptical about reading the book because I cannot take disturbing stories, especially which talks about murderers, insensitive crimes or about convicts in general. But at the same time, I was intrigued to know some of the most in-famous crimes the book was covering, so I didn't think twice when I said 'yes' to reviewing the book.
Black Warrant written by Sunil Gupta and Sunetra Choudhury and published by Roli Books is  a gripping and hard- hitting non-fiction about some of the prisoners of Asia’s largest prison. There are few honest and truthful facts about convicts and their last days which will disclose as you read the book, like What happens when a man is hanged, but his pulse refuses to give up even after two hours? Did Nirbhaya’s rapist, Ram Singh, commit suicide or was he murdered? And more such never before known insights of some of the most talked-about cases. The author spent most of his years as a jailor at Tihar and has penned down the story based on his own experiences. I am quite impressed with the way he has narrated the story in the most compelling way.
The story opens up in 1981 when the young author resigns from his railway job and reports to his new job at Tihar jail. The book has an illustration of how the jail look, then and now. the book covers some of the most controversial cases and what went behind when these convicts were in the prison. Some of them include the infamous jailbreak by Charles Shobraj or the one in the 1980s, where over a hundred, walked out of the prison with the visitors, without being stopped at the gates because they had managed to copy the seals which are marked on visitors’ hands and so on. It also puts light on the corruption played by officers and the power of money behind it.
Overall, the book is an honest revelation of what happens in a prison, which many have no clue what goes behind the bars. The author has done justice on his part of narrating everything he noticed, in truth, raw, honesty and some in a humorous style.
A great read for those who are curious to know more about prisoners, some of the most famous controversies, or to understand what is life like inside Asia’s largest prison?
Book Details
Title: Black Warrant
Author: Sunil Gupta, and Sunetra Choudhury
Price: 336
Page: 208 pages
Publisher: Roli Books (10 November 2019)
Language: English
ISBN-10: 8194206855
ISBN-13: 978-8194206859
My Rating: 4/5