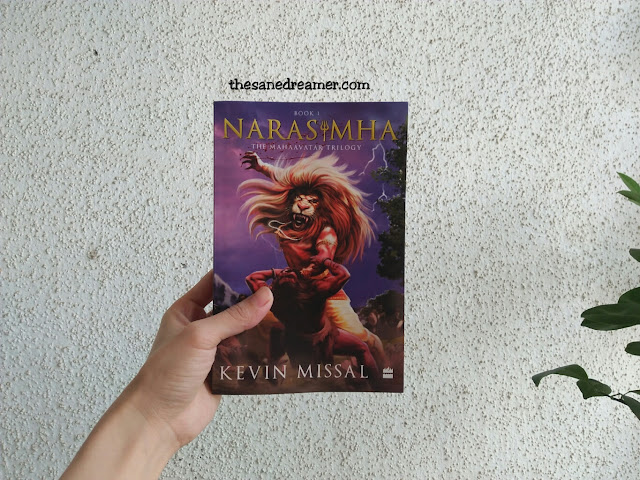 About the Book
Narasimha, once a brave soldier, has left the war and lies low as a physician in a village. But a familiar face from his past seeks his help to stop the tyranny of the blind usurper Andhaka. If Narasimha refuses, the world might just end. What will he do? And why did he leave the war in the first place? Prahlad, the interim king of Kashyapuri, is torn between the ideals of his unrighteous father and his love for Lord Vishnu. Whom will he choose? Hiranyakashyap, the ruler of the Asura Empire, wants to avenge the death of his wife. To do that, he must go through the Trials and get the ultimate weapon - the Brahmastra. But the Trials have sent so many others to their death. Can Hiranyakashyap survive?

My Take on the Book
Narasimha- The Mahaavatar Trilogy Book 1, the latest book by Kevin Missal is a pure page turner and a real treat for every mythology lover. The book is filled with rich mythological insights and brief narration of notable Hindu mythological characters like Prahlad, Narasimha, Hirnyakashyap, Holika, and more.
The book starts off with a strong prologue which gripped my interest and made me finish the book in 3 sittings (with breaks). A unique tale of Narasimha, the avatar of Lord Vishnu, who has turned his back on being a soldier and opted for becoming a physician in order to save people's life. However, a  familiar face from his past seeks his help to stop the tyranny of the blind usurper Andhaka. If Narasimha refuses, the world might just end. What will he do? And why did he leave the war in the first place?
Of battles, friendship, love, loyalty, and revenge, the book covers every aspect of an intriguing mythological read. Judging by the plot line, we can say that the author must have gone through a long process of research and collecting insights to bring the book to life.
With detailed description of all the characters, as well as the scene, the book was indeed refreshing and fascinating. The author's style of introducing female characters such as Holika, Dhriti, Chenchen, and Jyoti in the story was something which left a deep impression on me. The author brilliantly made the female characters an  important part in the plot just like all the other male characters. Every part of the narration made me want to flip the page and know what was going to happen next. A detailed story sketch given to us by the author was educative for someone who has little knowledge, but is intrigued about Hindu mythology. Kevin, as an author has beautifully crafted a tale which covered a wholesome tale of some of the major characters from the epic Hindu mythology.
From Prahlad, the interim king of Kashyapuri who was way different from his father to Hiranyakashyap, the ruler of Asura empire and King of Kashyapuri who is left with just one motive (avenge the death of his wife) and Narasimha, a legend, a hero who is known as an avatar of the Hindu God Vishnu, one who incarnates in the form of part lion and part man to destroy every evil.
Overall ,the book is sure to enlighten you and leave you wanting for more.
Go, get your copy today and explore the retelling of Lord Narashima, by Kevin Missal.

July 31, 2018
Tried and Tested! For the past two months, I went through a very bad acne outburst phase. And when I say bad, it means BAD. So, with my knack for researching, I googled trying to find a cure or maybe at least some home remedies to treat my acne. But, a multiple trial and error and I gave up.  We know how pimple popping is more than just satisfying, hence the 'habit' left me with very bad scares on my forehead and chin, also I noticed more acne than I had in the first place.  Finally, a visit to my dermatologists came to my rescue. She prescribed  some medication i.e. face wash (I am coming to this), some anti-acne ointments, and a few capsules to take.  Obviously, I had to religiously follow the skin routine treatment, but in the hour of everything, there was this thing which I discovered… it was the face wash (Yep, the point of this blog, TBH) which I can give the entire credit to. AKA presenting to you my fountain of youth in a face wash (I am exaggerating a lil bit.
10 comments
Read more

September 18, 2017
“He knows everything about her, right from her favorite books to her favorite bra. She knows everything about him, right from his favorite soccer club to his favorite x rated websites. He will complete her English homework, even at three in the night. She will arrange an Armani suit for him, even if it calls for flirting with ugly guys. He has her picture in his wallet. She has his number on speed dial. They talk to each other all the time. They talk about each other when they don't talk to each other. They discuss everything from periods to PlayStation. They have tasted alcohol and then thrown up...together. They have bunked countless tuitions... together. They can’t live without each other. YET they don't love each other. They are JUST FRIENDS... ” Can they be just friends? I mean a Boy and a Girl? This is a universal quest everyone is  trying to find seek. Some say they can, while the rest says it's not possible. I am ask
3 comments
Read more