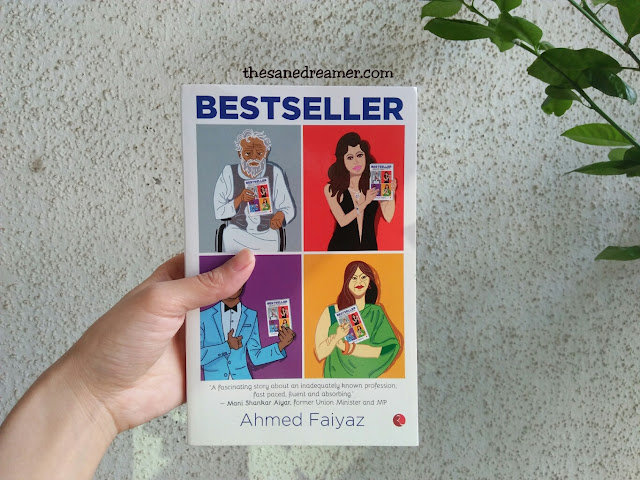 About the Book
Bestseller, a novel by Ahmed Faiyaz is a story about a 30 something man named Akshay Mathur, an out of work editor of a defunct literary magazine in the UK and a divorcee. He is forced to go to India to help shore up an old publishing house. Having an outstanding credit debt, he wished to pay it off and free himself by saying 'yes' to joining Kalim Publication. The death of Iqbal Kalim- the owner, left him with no choice but to take over the ailing publication house and help it build its value in the competitive publication market. Given an ultimatum by Angus Lee, the new owner of Thomson Lee Books, Akshay has to publish at least five bestsellers in the coming year, failing which the business would be wound up. He must find a way of making a success out of books he would never publish or would never even read. To complicate things further, he has to contend with a motley crew of has-beens and misfits working for the publishing house as well as wannabe writers, dealing with their follies and derisive tactics, and battle his own affections for Zorah Kalim, the impulsive daughter of his former boss.
Will he succeed in bringing out that one ‘bestseller’ from his publishing house? And what about his own life and love in office? Find out in this riveting read. In the meantime, you can read my take on the book below.
My Take on the book
The book takes us on a journey of what befalls in a publishing house. Been in the book blogging business, it was easier for me to understand what goes behind the scenes when a book goes through the phase of publishing, the amount of PR attention it needs in order to achieve the tag of ‘Bestseller’ and the constant planning and organising of unforgettable book launch event to create a hype and so on. The author Ahmed has precisely jotted the novel based on his experience of what happens when you are the man behind a publishing house.
The introduction of all the interesting characters kept me glued to reading and turning the pages simultaneous. Sita, who was considered as the mistress of Iqbal. Roshan Khan, the Bollywood star who with any means wish to publish his book, though he does not have for what it takes to be called an author. Anya Malik, a young and aspiring writer who turns out be a trickster just so she could publish her book, at any cost, even if it means using Akshay Mathur. Vinod Dutta, a fiction writer who wishes to write an erotic story, later turned into a bestselling author, however losing his life and not be able to celebrate the recognition. And, other characters like Gaurav Bedi, Mr. Samuel and so on... who wishes to make their name as an author, despite their lack of writing talents. Here, everyone is fighting hard to take their names up the shelf of the bestselling category and the protagonist Akshay trying his best to keep the chaos as sane as possible.
They say, don’t judge a book by its cover, but this book was one of which I had to judge by its gripping cover. Having said that, Bestseller didn’t leave me disappointed. I found the story really intriguing and amusing. The story is well-written, there is indeed lots of dramas which keep happening here and there, but at least, it is not dragged or dull. It was fascinating to read the reality and things that occasionally eventuate at a publishing house. Too much of inside stories, as well as some secrets been spilled out amidst the talk in a book launch and parties.
The story is gripping and refreshing. It is a light read with a legible story line. I genuinely enjoyed reading #bestseller.
Also, there are few errors here and there in the language, however, that did not stop me from finishing the book in 2 sittings.
You may want to grab a copy if you are looking for a light and refreshing read, or if you are willing to find out what are the typical dramas that go inside a publishing house, or if you want to know how far aspiring writers will go, just to see their book sit on the bestseller shelf, come what may.