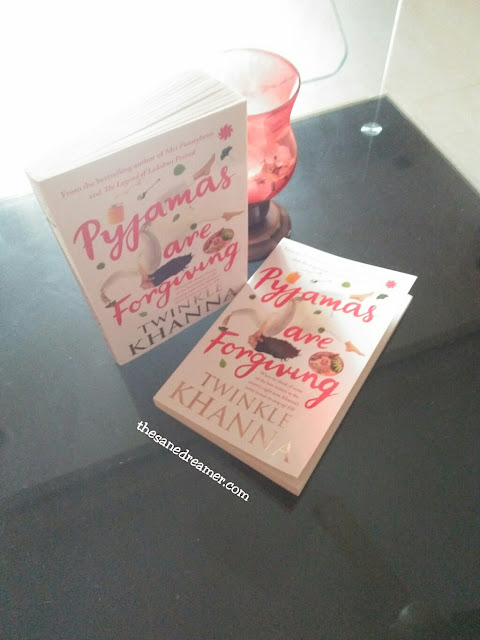 Blurb:
There sitting on that porch, that light-eyed man, a pitta like me, was my ex-husband and that woman whose inner element I was unaware of unless bitch is accepted as an undiscovered fourth dosha, was his young wife.
In the serene sanctuary of Kerala’s Shanthamaaya spa where food is rationed, sex is forbidden and emotions cantered, Anshu meets someone familiar and deeply unsettling – her ex-husband. Bittersweet, funny and wise, Pyjamas Are Forgiving confirms Twinkle Khanna as one of our great storytellers.
About the book:
The book is narrated by a woman named, Anshu who is in her early 40’s (divorced) and is childless.  To take a well-earned break, Anshu is in a Kerala Ayurvedic Shanthamaaya spa, where food is rationed, sex forbidden, and emotions cantered, whilst on her journey to remove dosha, Anshu is met with a familiar, yet a deeply unsettling sight- her philandering ex-husband, Jay, with his much younger wife, Shalini- who is quite opposite from her, both in physical and emotional term. Initially, Anshu is shocked and feels indignant, but slowly she is ready to balance and accept the sheer emotion of facing her ex-husband who left her for a younger looking woman.
Apart from the daily regime of drinking ghee, to performing the physical discomfort of Yoga poses, Anshu revisits the memory of her broken marriage in the ashram where she and her ex-husband were frequent visitors. As what the author has said in one of her interviews, the book ‘Pyjamas are Forgiving’ is reverse, a flip-book store where you start from the end where you have fallen out of love instead of the beginning. What would that look like? You need to grab a copy to find out, in the meantime, you can read my take on the book. 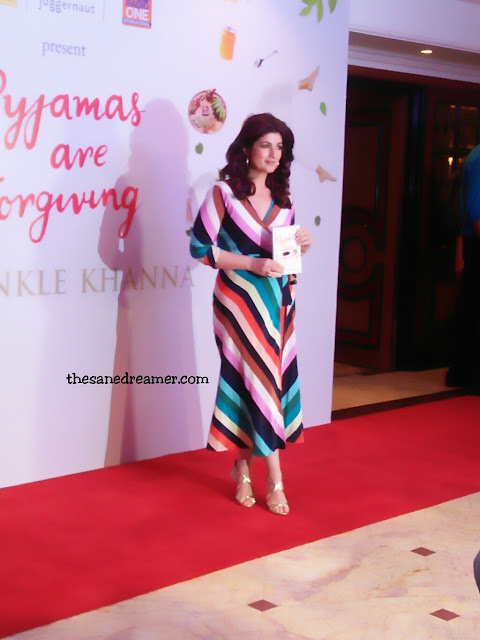 My Take on the Book:
I have been an avid fan of Twinkle Khanna right from the start of her writing journey, so, when she announced her third book, (a novel) I knew it was going to be unique, refreshing, hard-hitting and yes, with a good amount of humour and witty lines.
Pyjamas are forgiving is an in-depth understanding of strong women who many thinks do not have frailties, but yes, as humans they do. Anshu has been one of them.  She is mellow, wise, an old soul and worldly. The theme of the book delves around yoga, Ayurveda, wellness and little workings of the human heart when it comes to forgiving.
The book is a slightly dark tale about love, sex and paths retrodden, it will make you love, laugh and cry. It is merely about Pyjamas being forgiving which sometimes tend to be too accommodating and have a longer drawstring than it should. A refreshing as well as a unique style of plot line which will make you keep turning the pages and devour in one sitting.  You may find yourself feeling an empathy towards Anshu, who in the midst of healing her broken heart find herself flirting with a young man, which she later discovers that he is sick (mortally) . The book is the journey of Anshu, as a divorcee who is seeking for redemption, who is trying to remove the grudges against her ex-husband with rigorous treatment in the spa, a sentimental chaos of moving on, confronting with the old memories of her ex-husband revisiting her. The book also have other reference of what is happening in the world right now, taken from the inspiration of the current buzz #MeToo.

The book is unique, riveting, gripping and the title is apt. If you find yourself asking, Why Pyjamas are Forgiving? Then you will see that when all things fall apart, your pyjamas will still hold on to you with its drawstring. And, in the words of Anshu, “Pyjamas are forgiving in nature, it’s jeans that really know how to hold a grudge.” Also,  I feel Pyjamas are not just forgiving, they are also generous and welcoming even when you put on an extra pound.

July 31, 2018
Tried and Tested! For the past two months, I went through a very bad acne outburst phase. And when I say bad, it means BAD. So, with my knack for researching, I googled trying to find a cure or maybe at least some home remedies to treat my acne. But, a multiple trial and error and I gave up.  We know how pimple popping is more than just satisfying, hence the 'habit' left me with very bad scares on my forehead and chin, also I noticed more acne than I had in the first place.  Finally, a visit to my dermatologists came to my rescue. She prescribed  some medication i.e. face wash (I am coming to this), some anti-acne ointments, and a few capsules to take.  Obviously, I had to religiously follow the skin routine treatment, but in the hour of everything, there was this thing which I discovered… it was the face wash (Yep, the point of this blog, TBH) which I can give the entire credit to. AKA presenting to you my fountain of youth in a face wash (I am exaggerating a lil bit.) Ahaglow.…
8 comments
Read more

September 18, 2017
“He knows everything about her, right from her favorite books to her favorite bra. She knows everything about him, right from his favorite soccer club to his favorite x rated websites. He will complete her English homework, even at three in the night. She will arrange an Armani suit for him, even if it calls for flirting with ugly guys. He has her picture in his wallet. She has his number on speed dial. They talk to each other all the time. They talk about each other when they don't talk to each other. They discuss everything from periods to PlayStation. They have tasted alcohol and then thrown up...together. They have bunked countless tuitions... together. They can’t live without each other. YET they don't love each other. They are JUST FRIENDS...”
Can they be just friends? I mean a Boy and a Girl? This is a universal quest everyone is trying to find seek. Some say they can, while the rest says it's not possible. I am asking you this because the title of the book I will be re…
2 comments
Read more