Book Review: Hell! No Saints in Paradise- A. K Asif 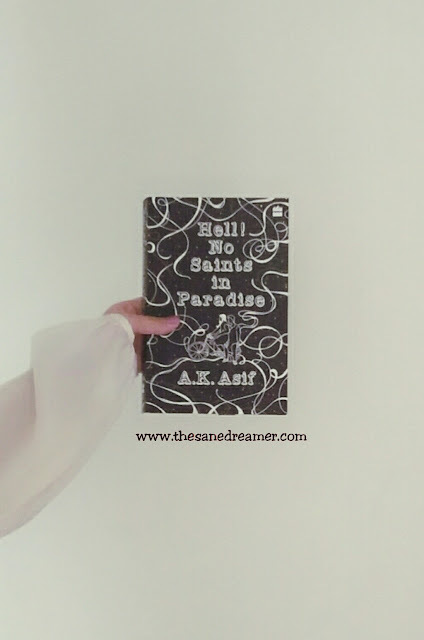 “Had I not Seen Hell and Paradise with my own eyes, I had have taken his answers to be mere metaphors at best and a big joke at worst.”


Blurb
2050, New York. In the aftermath of a gruelling spiritual cleansing quest, Ismael, a Pakistani-American student, enters into an alliance with spiritual beings who send him on a perilous journey of self-discovery. A non-believer,  Ismael must return to Pakistan, now in the grip of a brutal fundamentalist government, and gain the trust of his estranged father, a prominent extremist in the Caliphate. To accomplish this, he must pose as a true believer. Will he survive long enough to infiltrate his father's inner sanctum and complete his mission? Hell! No Saints in Paradise is both biting satire and allegory that takes urban fantasy to dizzying heights.

So before I begin my review, just a few thought….
Do you believe heaven and hell exist? As a religious believer, I feel if there is God then there can be an evil existence too. Similarly, if there is heaven for good people then there is definitely hell for the evils.

About the Book:
‘Hell! No Saints In Paradise by A.K. Asif intrigued me ever since its release and the moment it started making its way on the social media page of every book lovers. Thankfully, I received a copy and I left behind what I was reading and started digging into the lovely looking black and white cover. The book can be categorized as a dystopian read which is set in the year 2050, Ismael, the protagonist is a Pakistani- American student who took up a thesis topic to research on ‘Paradise and Hell’ and on being advised by Petra, a female stranger she met at a cafe, he is asked to visit Yage Yoga Centre and try out the Ayahuasca- a spiritual cleaning, to comprehend if heaven and hell exist. Although he is an atheistic non-believer of religion, his work demanded him to find the ultimate truth that leads him to his native place- Lahore.
He sets on a mission to make up with his father- a prominent extremist in the Caliphate, survive the sinister and eerie situation of his hometown, complete the mission, come back to New York and finish his paper.
From the moment he lands at Lahore to the journey till he reaches his home, Ismael
goes through a lot of very strange things which was possibly new to him, the way how a man is judged by the length of his beard to a suicide jacket considered as a fashion statement, a cricket stadium turned into a martyred ground where killing another human takes you closer to enter the highest divine place AKA Heaven. Wali, his father's right hand is willing to help him get familiarize with all the tradition which he missed out on being away for 12 years.
Ismael journey to find out if heaven and hell exist takes him through some spin chilling situations and a considerable amount of fulfilling and staying away from his weakness for lust. Join Ismael on his journey when he encounters how corrupted his birthplace has become, he is shocked to see his own father ways of making money was by running a business of suicide jackets. He is stuck between the parallel realms of heaven and hell.

My Take:
I must say the book is written brilliantly and it's no doubt that the author is good with his words and narration. I did enjoy the way how he turned his imagination and creativity into a detailed satire plotline. However, there are often some parts which might confuse the reader or someone who is not familiar with Islamic views and religion. I was hooked from the start, but somewhere in between I was swayed and I felt it was kinds stretched, also the unnecessary narration of sex and more sex made me want to skip the pages and take a break to refresh my mind.
The book might leave you questioning why/how far People will/can go and do anything to reach paradise, even if it means killing another human, which technically should be considered as the greatest sin. Ain't it?
I was on the verge of giving the book a full 5/5 but somewhere along the line, I thought the narration was pointlessly stretched as it lost its flow towards the middle part.
On a good note, the interesting part of the book was the allegorical description of the fundamentalist concept of Islam and the satirical narrative is what kept me reading till the last page. Overall, this is a good read, and I could finish the book in just two sittings. The strong imagination of the author is something which impressed me. I would surely recommend this book to anyone who is willing to take a joyride into the fictional world of 'Heaven and Hell' and witness the battle between good and evil.
Will   Ismael succeed on his mission on finding the truth about Heaven and Hell? How will he escape his greatest weakness amidst tempted by lust? Will he change his perspective towards religion and its effect on humans?  Find out in this satirical urban fantasy novel ‘Hell! No Saints in Paradise by A.K. Asif. 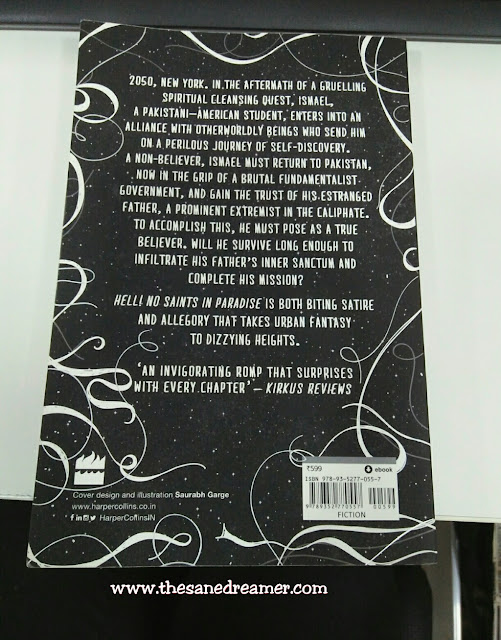 
Disclaimer: I received this copy from Writersmelon and Harper Collins in exchange for an honest and unbiased review. All the opinions expressed are my own.